Marketers keep on telling us that they need sensational images and slogans to grab consumers’ attention. Fashion giant DIESEL shows that it is also possible to choose an approach that does not stereotype men or women. And they are explicit about the ‘gender neutral’ strategy.

While globalisation dissolves many boundaries that used to give people safety and identity, a reinforcement of clear reference points can be see a compensation: In fashion, sports and food, a new focus on traditionalism is one of the many trends of our times. Men with beards, tougher and tougher sports and leisure activities, and lots of down-to-earth food like burgers, steak and sausage show some of the preferences of the current market. In this environment, DIESEL chose to emphasise another parallel trend, that of Diversity and Equality. While it is no longer a sensation to see androgynous models or men as models for female aesthetics, DIESEL found a new way to reflect modern values. They call their latest billboard ad ‘gender neutral’ including on the ad itself.

The new DIESEL ad features two people in similar jumpers, embracing each other. As we don’t see their figures, we are left with the faces to find out about their biological genders. And we can’t. Both models could be either male or female or transgendered in either direction. This is the remarkable point about the billboard ad: It is geared at both men and women by focusing on neither male nor female gender expressions. In this way, it is not only gender neutral but also gender inclusive. Already in the early days of Diversity Marketing, the both-and-approach was conceptually described but rarely implemented. To that end, DIESEL follows its claim to be a rebellious brand.

Fashion magazines have already started pointing at toward gender-fluid designs and presentations. But the producers of clothes used to like their separated collections for men and women – with some unisex exceptions. DIESEL’s move is likely to be a test rather than the beginning of a trend. So we are curious to see the results. To date, the campaign has received surprisingly little attention. 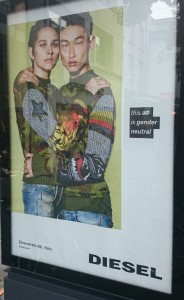